I know a lot of good men who, despite their best efforts, don’t really understand what it’s like to be a woman when it comes to personal safety. And, while I generally move through life assuming the best of people, in most respects, I also know (based on life experience) I need to be on guard when it comes to men.
On twitter today I experienced a solid example of how the littlest things can turn upsetting when it comes to interacting with men. It’s also an example of an exchange that could have many other explanations that don’t include the potential for violence. Therefore, it’s a good example of the kinds of everyday interactions women face all the time, at every turn, where we need to make the calculation, if I respond this way, will they get angry (which, offline, could lead to violence) enough that it will be scary? or, if I respond this other way, will it be worse?
Here are the series of exchanges.
This man followed me on twitter a while ago. I followed him back for a while, even though it seemed from his tweets we probably didn’t have a lot in common. I enjoy interacting with people who have different points of view.
Our interactions were cordial, even kind. 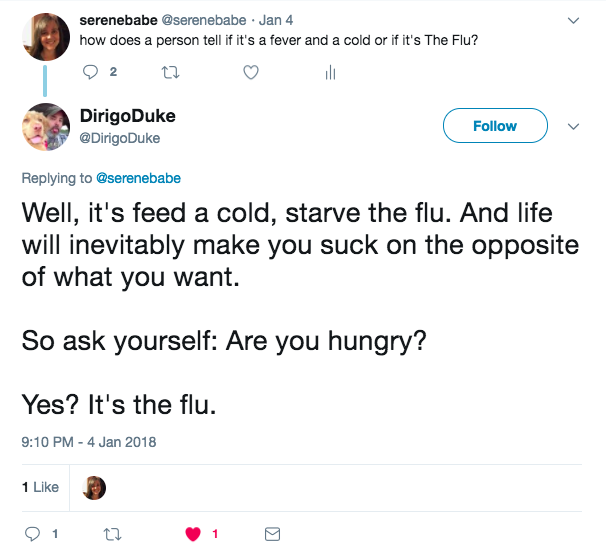 Should I “heart” the tweet, indicating I saw it? Sure. I think I even replied with a thank you, or something like that.
Then, a few days ago, there was this exchange: 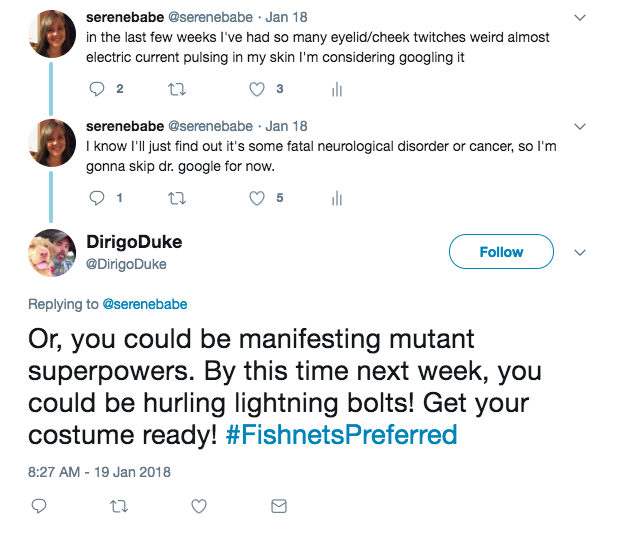 The “fishnetspreferred” hashtag made me uncomfortable. But, y’know, it’s twitter, the wide-open Internet and we’re all adults here. At this point I start weighing my potential responses, if I don’t “heart” the tweet, will he take it badly? (too many men would.) If I heart it will that only encourage him to move farther along in that direction? In my experience that’d be pretty likely, so, no, I decided not to heart the tweet. I also decided to stop following him, taking the chance of sending a quiet message that, no, I didn’t like the tweet.
I didn’t spend many minutes on this decision, but I did have to think about it and decide which of the possible outcomes would be least annoying (or, in the worst case scenario, least scary or unsafe).
That shouldn’t be a big deal, right? So, his joke kinda fell flat because I didn’t heart it, who really cares? (I also thought, maybe he’ll just think I never saw it and it really won’t be an issue, or maybe, if I’m really lucky, he just won’t care…)
Then, today, I got another tweet from him. I want to say in advance that I’m fully aware the change in tone could be entirely unrelated to my not hearting his “flirtatious” (?) tweet. But I also want to say that it has been this 48 year old woman’s experience that men can get hostile really quickly when their advances are rebuffed. So, take this next tweet as you will: 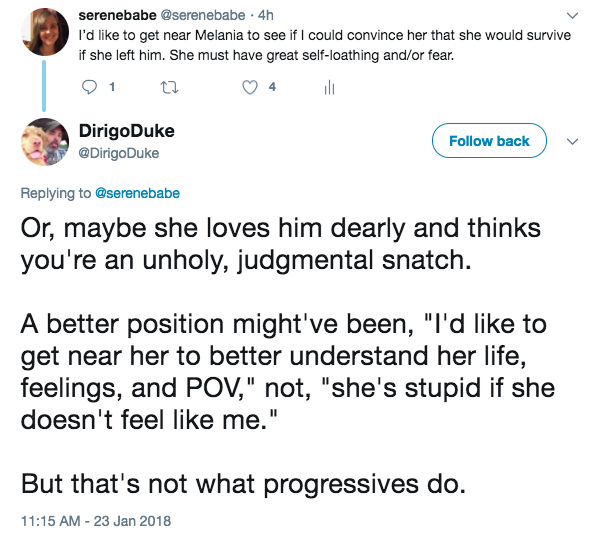 If he hadn’t had that hostile first line, I think it could have been an interesting discussion. But, no, the hostility and misogyny of the tweet was clear.  I tweeted two responses. One, that I never called her stupid. And, two, that I was going to block him because his anger made me feel unsafe.
I’ll say again that I recognize there are all kinds of ways of reading this series of exchanges. But, in my experience (and that counts beyond just something “anecdotal” because I know I’m not alone in my experiences), this kind of escalation into hostility is typical if I don’t smile or laugh along with jokes that make me uncomfortable. (And if I smile or laugh, they’ll continue and get worse.)
I’m sharing this in the hopes that some men I know might continue learning how tricky it is being a woman out there in the world. If we women dare not smile and “encourage,” we end up being called “an unholy, judgmental snatch” (the choice of language for his insult is another indication about his lack of respect for women).